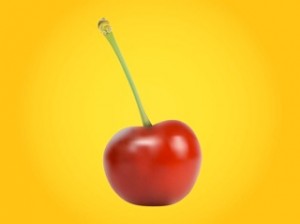 For the next month or so, cherries are in stores, at farmers’ markets and impromptu roadside stands.

There is nothing like biting into a cherry and feeling the crunch of the crisp skin as it snaps between my teeth. The ensuing explosion of juicy flavour brings ecstasy to my mouth!

Cherries are among the healthiest foods on earth. They contain a plethora of nutrients including Vitamins A and C, anti-oxidants, and phytochemicals.

There are several studies suggesting that cherries prevent cancer.

But you won’t see that in a TV ad. The US cherry growers suggested on their website that cherries could prevent cancer. The statement is backed by solid scientific studies.

The FDA (Food and Drug Administration) successfully sued the cherry growers for making health claims. It doesn’t matter if they’re true; such claims are verboten!

Yet Subway makes “Eat Fresh” claims. Their lettuce arrives at the restaurant pre-chopped and it never turns brown! They obviously spray or soak it in something to preserve it. Is that something good for me? Does the FDA sue Subway? Of course not.

If we eat too much healthy food we won’t get sick. Our being sick is in the best interest of many companies. So unless we look for them, we will never learn the health benefits of eating cherries.

I suggest you eat as many cherries as you can in the next month. Organic is best but all fruit should be thoroughly washed.

Cherries don’t hang around long at my house so I have few recipes for them.

A great way to serve them, especially if they’re getting soft, is to stew them. Throw into a pot with a bit of water. Add sweetener (honey, maple syrup, agave, coconut sugar) to taste. Bring to slight boil. Turn down heat and simmer for 15 minutes or until fruit is soft. Cool slightly. Serve warm with a few tablespoons of coconut milk.

Warning: overeating raw cherries can lead to a few unpleasant side effects. Because they’re high in vitamin C and fibre, they can have a laxative effect. If you’re sensitive to them, it’s best to eat a few each day and work your way up to eating them by the case like I do!

Don’t forget to include sour cherries in your diet. Their nutritional profile is even higher than the ones commonly sold in stores. Sour cherries of some variety grow almost everywhere and their seasons vary. Sour cherries are great edible landscape plants.

So cheers for cherries. Eat ‘em while they’re here for they are too soon gone.

Saute first seven ingredients in a large pot until onion is tender and meat is brown. Cover with 6 to 10 cups water. Simmer for 2 to 4 hours or until meat is falling-apart tender. Stir in cabbage, carrots and potatoes; cook 15 minutes. Add beets, dill, tomatoes and enough water to cover. Simmer for 15 to 30 minutes.

Vegan: This meal in a bowl can easily be prepared without the meat and served with a bit of coconut milk.