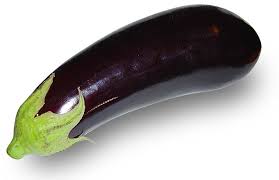 It may not be to you, but to me eggplant is exotic.

Purple, oblong, somewhat egg-shaped, eggplant is a common vegetable in dishes from India, the Mediterranean and the Middle East, but it’s unusual in North America. They’ve been cultivated for at least 2500 years.

Eggplants belong to the nightshade family of vegetables, which also includes potatoes, tomatoes, sweet peppers and tobacco. They grow like tomatoes, hanging from the vines of a plant that grows several feet in height. Different varieties range in taste and texture, eggplant is described as having a pleasantly bitter taste and spongy texture.

It’s that spongy texture that makes me leery of eggplant.

But I want to eat it. Purple foods are rife with micronutrients. Purple is a clue to eggplant’s nutritional strength: in addition to vitamins and minerals, eggplant contains important phytonutrients, many of which are antioxidants.

Because of those super nutrients, eggplants are brain food and they reduce cholesterol and heart disease, all good reasons to incorporate eggplant into your diet.

The easiest way for me to eat eggplant is babaganoush (babganouj). Here’s my easy recipe.

Eggplant is in season from August to October, but it can be found in supermarkets year-round.