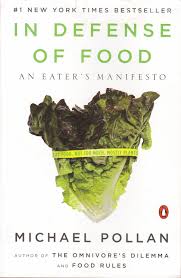 This New York Times best seller is a book that everybody should read but most probably won’t.  So as a public service, I decided to write a summary of it.  Here are some of the most profound ideas in the book.

Pollan starts by sharing this mantra: “Eat food.  Not too much.  Mostly plants”.

He then describes “Nutritionism”: our idea of food broken down as individual nutrients and why that has become a problem for modern eaters.  We have begun to think of food as its parts: carbs, fats and proteins, totally missing the completeness of food and even its social implications.

Scientists typically study the individual components of food and are constantly baffled (or happy to report, depending on who is funding the study), that these parts are rather insignificant on their own.  Studies often totally miss the wonderful things that nutrients can do because they insist on studying them as if they exist in a vacuum.  Furthermore, when industry funds nutritional research, conclusions find favourable results for their products.

The overriding message is to stop eating a western diet. Pollan offers this advice:

There is no magic bullet.

If you never get the chance to read In Defense of Food, you now know the basics.  I hope you’ve found this information as interesting and useful as I have.