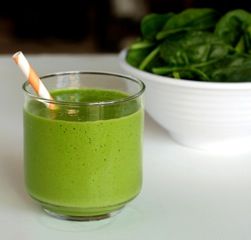 On the one day of the year that we all claim to have a little Irish in us, I urge you to look at “Green” differently.

Turn away from green beer or cupcakes adorned with great gobs of greasy green icing.

Turn instead to spring greens, perhaps blended into a smoothie or sprinkled with lemon juice and olive oil and eaten with a fork.

Infusing food with green dye may seem like fun, but the truth is most food colouring is toxic, especially blue and yellow food dyes. Green, being a combination of these two, could be the most toxic.

What do food dyes do to the human body? Nobody knows for sure.

That’s right! Most food colouring is considered GRAS, Generally Recognized as Safe, and therefore has not been extensively tested, along with the other tens of thousands of chemicals lurking in our food supply.

Basically this means that until a problem is demonstrated, such substances remain in our food, causing unknown effects and contraindications with all the other foreign compounds in our bodies.

Because of the dearth of testing, our clues are mostly anecdotal. There is evidence that food colouring and other chemicals added to food contribute to cancer and can adversely affect children with ADHD tendencies.

My first daughter exhibited signs of ADHD as a toddler so I educated myself on the possible causes. I began a habit of preparing most of our food so I could control these poisons.

Of course it’s impossible to know if that made any difference but my daughter managed to survive without taking brain-numbing ADHD medications.

Is one glass of green beer or one green cupcake going to kill you? Probably not.

But our bodies are so bombarded with toxic chemicals that any tiny steps we can take to support them are worth it.

Substituting a green smoothie for a green beer is (at least) two steps: “not ingesting” the food dye is one step (or the alcohol, another step?) and “ingesting the whole real food” in your green smoothie is the other.

I urge you not to leave your health to the “Luck o’ the Irish” but take control by choosing the right green, not just on St. Patrick’s Day, but every day.

Make your own food colouring: